The Planetary Dance is a ritual of healing and community renewal. It is an invitation to people all over the world to join in a dance for peace in their own communities and for peace with the Earth. It brings people of all ages and abilities together to “dance for a purpose,” much as people in traditional cultures have danced for a bountiful harvest, a successful hunt, or a happy marriage.

The Planetary Dance is a participatory dance rather than a theatrical performance. At its heart is the Earth Run, a simple dance that everybody can do. Participants are invited to run, walk, or simply stand in a series of concentric circles, creating a moving mandala. As participants move to the steady heartbeat of the drums, they become one collective body.

Each step upon the Earth becomes a prayer for healing.
There are usually two or three runs. Everyone starts in a huge circle with the drums (or other percussive instruments) in the center. For the first run, as they feel moved to do so, one by one, people stand, opening their arms up to the sky and calling out a personal dedication to run for someone who needs healing. This personal dedication can be a powerful experience. (Example: “I run for my father, who is living with cancer.”)
For the second run, each person calls out a common cause, such as global warming concerns. (Example: “I run for clean water on all continents and for all people.”) The first and second runs can be combined, with a dedication to both the personal and the global. (Example: “I run for my father, who is living with cancer, and for all people living with cancer.”)

The third and final run is led by the children and is dedicated to their future. The children may invite adults to join them. The Planetary Dance is an event for all members of a family.

Each Planetary Dance community around the world creates its own special focus, or theme, for the event, in addition to the global theme of peace among people and peace with the Earth. Different Planetary Dances, for example, have focused on healing from breast cancer, ending gun violence, and supporting social justice. The basic schedule of events involves a preparatory phase, the Earth Run, and a closure. In the past, in the Bay Area, the day would begin with a sunrise ceremony on the peak of Mt. Tamalpais followed by a late morning gathering in a meadow at the base of the mountain. In addition to instructions and a warmup for the Earth Run, invited guests offered stories, songs, poems, and movement. After the Earth Run, everybody would eat together, reflect on the event, and talk about how they would carry the spirit of the Planetary Dance into the rest of our lives.

The Planetary Dance can be done by any number of people almost anywhere. During the pandemic, for example, the Planetary Dance moved online, with participants around the globe, running together—both indoors and outside in backyards—to the beat of the online drums.

The Power of Dance as Prayer

In large group dances an exceptional phenomenon occurs time and time again. When enough people move together in a common pulse with a common purpose, an amazing force, an ecstatic rhythm eventually takes over. People stop moving as individuals and begin to move as if they were parts of a single body, not in, uniform motion, but in deeply interrelated ways. In these archetypal movements they seem to be tracing out the forms and patterns of a larger organism, communicating with and being moved by a group spirit.
This is an ancient phenomenon in dance. Cultures everywhere have channeled the power of such a group spirit to help bring rain, hunt, raise crops, and initiate the young. It is a power that can renew, inspire, teach, create and heal. In the Planetary Dance this power is used toward peace. 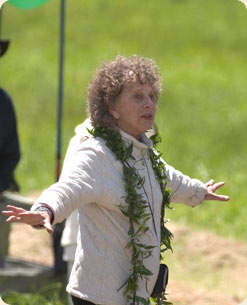 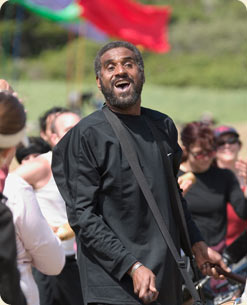 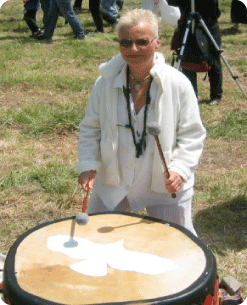